Took it down to the wire tonight. The last 3 nights have seen really good deer activity starting early between 3 and 330 in what is left of a 1 acre standing bean plot. Tonight it started out disappointing with only a group of 5 does that didn’t hit the plot until a little after 4. They fed in the beans 60 or so yards out from my position in my make shift ground blind I carved out of a fallen tree branch that was still hanging in the tree. They fed out of the plot after about 40 minutes.

I thought the evening was going to be a bust, but sat tight as I had put in plenty of hours already in the last week so what’s another 45 mins. It was quiet until about 5 when a group of about 6 does came bounding into the the plot from the north. In the back of them I could see a deer that clearly had bone on his head. After they settled into the plot eating I grabbed my binoculars and found the buck. Low and behold it was my preferred target buck. After another 10 mins or so he fed closer to me to 55 yards but facing me. It was getting to the point light was fading and after a few times ranging him my range finder battery decided to die. No more range finder. At this point it was decision time. He was broad side with his head in the beans and had no clue I was there. I figured this was as good as an opportunity as he was going to give me. I had plenty of time to draw settle in and get comfortable. At release the knock lit and I watched it sink into him behind the shoulder. He ran off to the NW toward a deep ravine with the arrow still in him.

At the time it was tough to tell exactly where the hit was, but I felt good about the shot. I gathered my gear and went to check the scene out before light was complete gone. No blood at the impact site. I walked to the edge of the timber to try and find where he entered and saw my lighted knock 15 yards ahead of me. The arrow had snapped offer with half of the arrow still in him. I was feeling more confident with this revelation, but was still not seeing any blood. As I worked into the timber down the trail I presumed he had taken I still had no blood. Getting a little worried at the fact there was zero blood. As I looked around I noticed up ahead, 10 yards, at the top of the the ravine what looked like a main beam sticking up. I thought no way I got so lucky that he didn’t make it at least down to the bottom of this very steep ravine. Sure enough there he lay looking right at me. The shot ended up being a little higher than I thought, but still got both lungs. He only went a total of 60 yards.

It has been a long season with not having the time earlier in the year to devote to any serious time in the stand due to work being crazy. . I have hit it really hard since Christmas and am very lucky to have an understanding wife who is ecstatic this was the last day of the season. I would have to say this is the hardest I ve worked to get a deer and it makes it all the sweeter. It is especially sweet since I missed this deer last year at 30 yards. It was along season but I am thrilled with the outcome.

Happy shed hunting to all and can’t wait until next October. 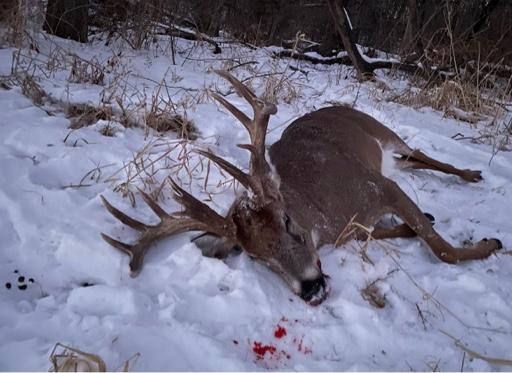 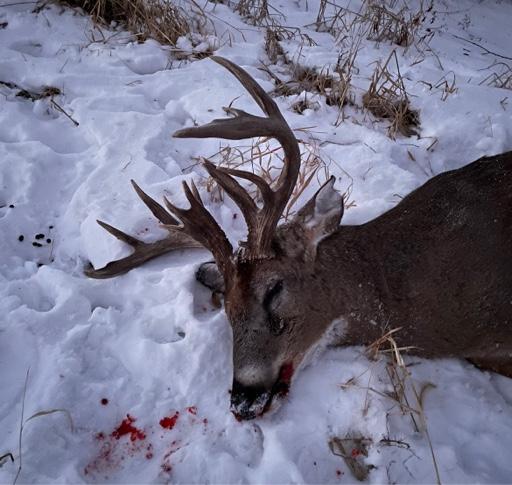 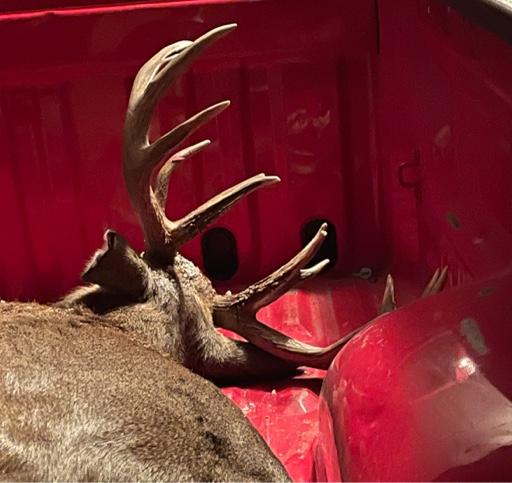 Sent from my iPhone using Tapatalk

Very cool buck congrats. I think their are many of wives that are saying the same thing after this year.

Nice one!! I can see why you wanted to stay after that 1.

Awesome deer and you earned it. Congrats!

That's a great buck and a memorable story too. Congrats!!

Way to stick with it! Congrats

Sweet buck. Way to stick it out.

Wire buck for sure! Congrats on the buck and determination

Cool buck, love the brows. Congrats on a great last-minute buck, can't get more rewarding than that!
B

That's a hoss! Congrats on a dandy

Nice work, way to stick with it.
O

What a toad! Way to stick with it. I swap the bow for the muzzy in late season. My hat's off to anyone who seals the deal with a stick and string in the late season. I don't know if I could draw and shoot accurately after sitting in sub freezing temps for a couple of hours. Steadying up the muzzy is difficult enough. Congrats!

BOOM!!! What a way to end the year. Way to stick with it and persevere. Great buck, congrats

Great read. Thanks for sharing! Congratulations!

Awsome buck!! Way to hold out till the end!!!

Sent from my SM-G996U using Tapatalk