Hey everyone, first thread. I know I know, we hear this every year. “The bucks are shedding early” then everyone starts shed hunting way too early. Trying not to fall in that trap but I am seeing WAY more early shed bucks than normal this year, both on places I hunt and on social media. Wanted to see if you guys were seeing the same and what you think could be the reason.

On my family’s property alone, I know of at least 6 bucks that had shed at least one side by the end of season, which is a decent percentage for around 200 acres. One shed in Early December and looked healthy. These deer are not stressed (except for maybe from other bucks). Hardly any hunting pressure with no real targets sense late October. And have plenty of food.

A few miles away my brother killed one of our targets and he shed when he hit the dirt. Now this deer didn’t have that much to eat and I estimate he lost at least 50 pounds sense October. That seems like a lot but we weigh our deer and just going from sightings and his end weight. He also had a big infection on his hind quarter likely from fighting. So this one kind of makes sense as to why he shed. BTW, he tagged it on the leg cause the antlers fell off lol. 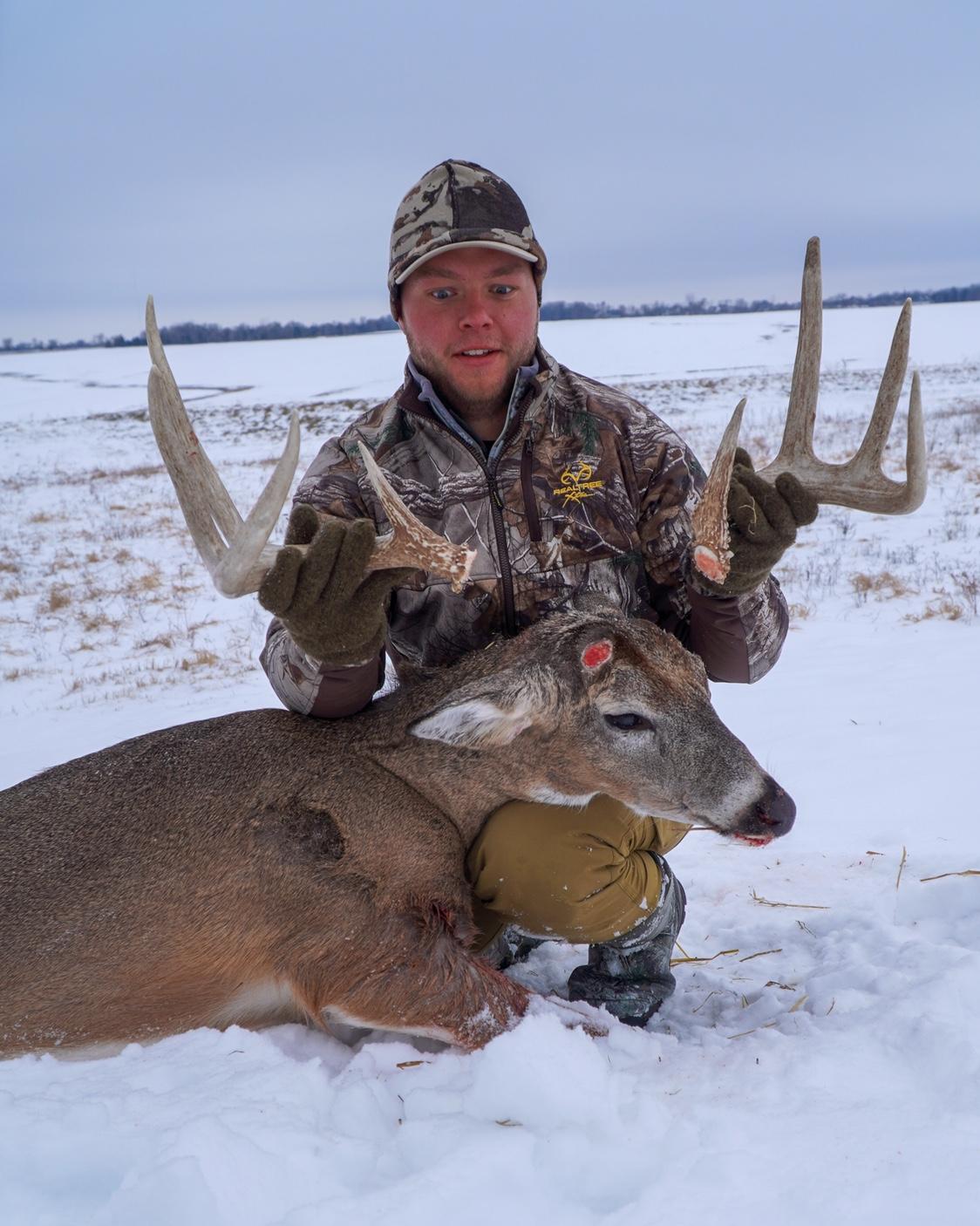 Overall, just seem to be seeing way more than normal. Don’t know what to really attribute it to. The winter hasn’t been overly harsh I wouldn’t say. My only thoughts are that this is a year when I also have seen the bucks be way harder on each other, I attribute that to just having more bucks and the heard being the best it has been in a while. Maybe more stress on each other. What are you guys seeing and do you think it will have any impact on next years racks?

That is a great picture!! HA HA

They don't get much fresher than that! Glad I skipped the late season.

We had a lot of bucks lose them when they hit the ground during shotgun too. Typically have one every two or three years. We had four this year.

I'm with you, not sure what the issue is. Musta been the Covid

It does seem like there may be more shedding early this year, but some do every year. I can remember finding a fresh shed once during 2nd shotgun season. I also helped a guy drag out a late muzzy kill on Christmas morning once and the antlers came off in our hands. So it happens some every year...but yes, I am hearing it more this year too. I think Kelcher nailed it, it's the COVID.
W

I've seen a few sheds already around home too. I just assumed they were stressed because they didn't get a stimulus check.

I have a lot of shed bucks already here as well, i figure the snow and hard icepack has had them stressed as most of their food was under 8" of snow with and inch of ice on top of that. they very quickly transitioned to standing beans or corn. No worries if they shed early just hopefully the squirrels dont find them.

No different than any other year IMO. I had a buck that shed during 1st gun season every year, for 4 years, regardless of weather. Glad the hunter matched them up!

Seems a little early this year. Seen multiple shed bucks on farms I hunt. Some have been shed for a few weeks. Had 2 behind my house tonight, one looked like he had just lost them today. Idk why but seems like more early shedders this year

Deer shed every year Dec to March. Every year there are hunters who say they are shedding early.
R

Almost all the bucks on my farm are still carrying both sides as of this last weekend. Did have one trail cam pic from Dec 16 of a buck that had just shed. Only one I’m aware of on my farm. W Central IL
C

I picked up a fresh shed Sunday, have a couple missing one side on camera. I think they do shed earlier than 5-10 years ago.

Staff member
Agree!!!!! I agree with folks who think it’s little more shed & earlier. & agree “we hear this every year” but this year u r spot on IMO. Doesn’t change anything really but agree. I started getting them shed in early December.
just a GUESSTIMATE but I’d guess.... 20-25% r shed now. Vs normal years I’d say 10%.

usually we wait until March 10 or so to really see about 95% dropped. I’m gonna GUESS that date will bump sooner this season by couple weeks. BUT- we also, so far, having relatively mild winter. Whole game could change if we get -10 to -20 & snow or something wild. Again- probably won’t change anything for shed hunting or anything we can do about it.

I do not know what would cause bucks across state to be shedding earlier but it’s the case this year IMO. Not that it matters & maybe I’m way off here BUT...... if I had to take a wild stab at it.... my guess would be an environment over last year that increased parasite levels in deer. Worms, flukes, ticks or something along those lines. Clearly stress is factor in shedding- injury, rut & health in general. Parasites is my GUESS on the commonality of earlier shedding this year.

Wonder if ears of corn laying on the ground since the derecho has mold/aflatoxin that is challenging their health?
H

JNRBRONC said:
Wonder if ears of corn laying on the ground since the derecho has mold/aflatoxin that is challenging their health?
Click to expand...

That is an interesting take on it. Most of the damages missed our area. I would guess there will be some very healthy deer up in those areas in years to come, all that natural hinge cutting and waste grain

What about the early cold weather we had?
Or a very successful breeding season?

Just pulled a chip from camera over a food plot was there from nov 26 thru jan 11th. Was surprised to see 2 bucks that were shed buy dec 14th. And 5 buy Jan 11th!

Idk, seems like every year bucks dropping early is the big talk in January. Seems like every year more and more attention is put on sheds and shed hunting, the social media pages have people out full bore shed hunting in December. It may be a little early or a little later each year, but I doubt theres anything crazy going on.
You must log in or register to reply here.
Share:
Facebook Twitter Reddit Pinterest Tumblr WhatsApp Email Share Link
Top Bottom